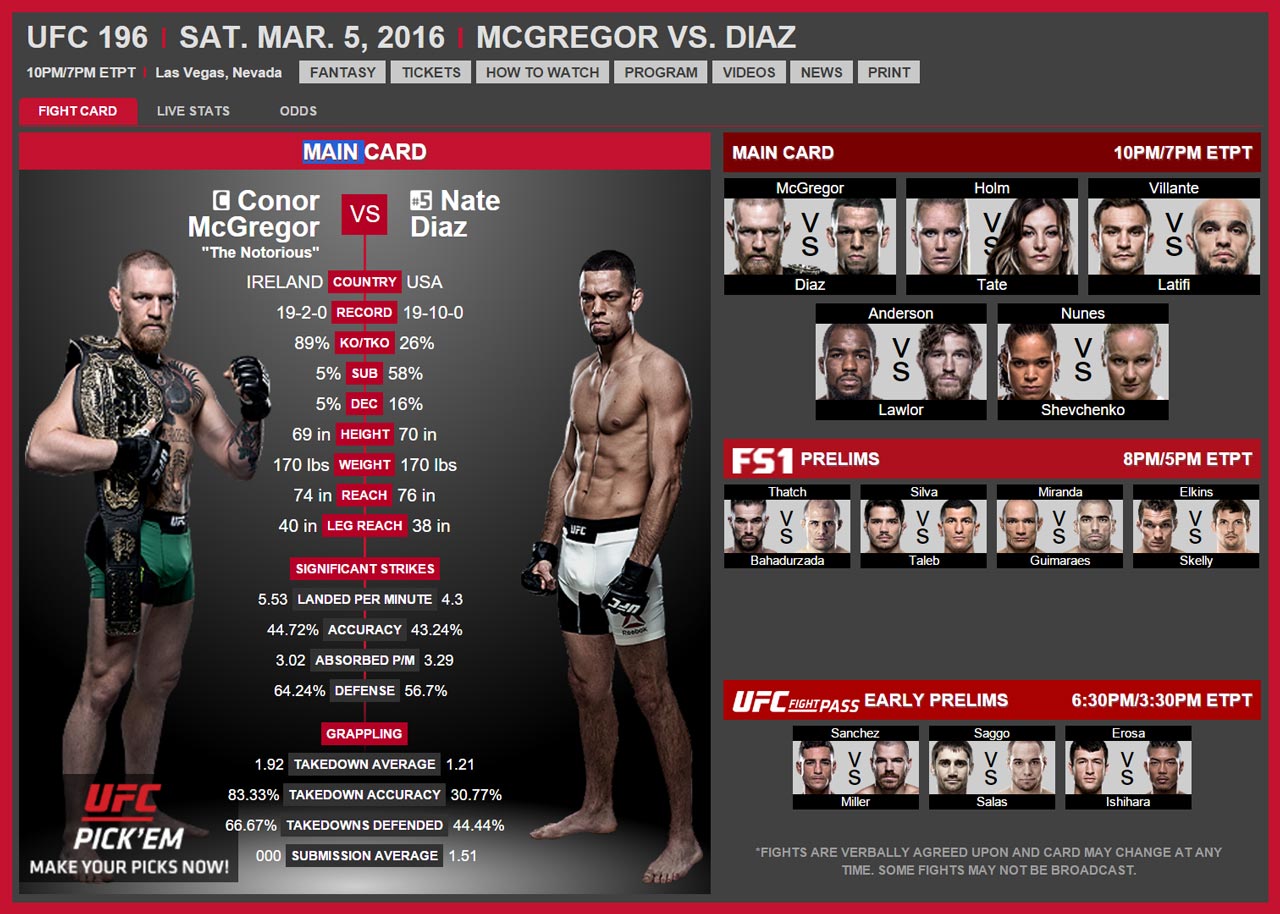 With a lightweight title battle off the table, Conor McGregor has picked to climb two weight classes in his Non-Title Welterweight Battle against Nate Diaz at UFC 196 on March 5th 2016

UFC President Dana White first released the new title match up on SportsCenter. With both Fighters duking it out at 170lbs, you can Guarantee this Main Event will give everyone something to talk about. UFC 196 will take place at MGM Grand Garden Arena and of course on Pay Per View.

The current 145-pound champion, McGregor (19-2) was initially planned to protect his title against the 155-pound champion Rafael dos Anjos (25-7) on March 5, yet that bout fell through when Dos Anjos formally withdrew citing a broken foot Tuesday. He will most likely be out for six to eight weeks.

God bless this hard work. I don’t care about weight divisions. I’ll run through everyone on the roster. #11Days pic.twitter.com/AAd25Rme73

The UFC explored multiple options once dos Anjos fell off. According to White, offers were extended to former lightweight champion Frankie Edgar and Aldo, neither of whom could accept. Edgar is dealing with a groin injury, and Aldo’s coach, Andre Pederneiras, told Brazilian news outlets that Aldo wouldn’t be ready on such short notice.
White explained on SportsCenter how Diaz ended up with the fight.

Diaz, of Stockton, California, is a former lightweight title challenger. He fought then-champion Benson Henderson in December 2012, coming up short via unanimous decision.

I don’t know about you, but We Cant Wait to Watch UFC 196.  Even though Conor Mcgregor isnt going to be fighting for a belt, Nate Diaz is going to give him one hell of a Fight! Plus there’s the much anticipated Holly Holm fight. Can she live up to all the hype after her Huge upset Victory over Rhonda Rousey? We’ll see if she has what it takes to Defend her Title against Mischa Tate. With all of the Great Cards on this line up, You’re not gonna wanna miss this Great Event!

Reservations Must Be Made in Person

$10 per person for reservations or $5 per person the day of the event.